Kenneth Webb ATD (Hons), RWA, FRSA.
Internationally known artist Kenneth Webb is represented in Ireland by the Kenny Gallery, Galway and the James Gallery, Dublin and Dalkey: in the U.K. by W.H. Patterson, Mayfair, London.
In 1953 he was appointed Head of the Painting School, Ulster College of Art. In 1957 he founded the Irish School of Landscape Painting and has since lectured for Queen's University Belfast, and in the Tate Gallery, and National Gallery, London.
Publications include "Kenneth Webb" (1974) Shenval Press, London, and "Webb, a Profile" by Thomas Kenny (1990). An inspiring teacher, many of his past pupils are members of professional bodies, RHA, RUA, etc.. He now spends less time teaching and is a visiting Tutor at the Irish School of Landscape Painting.
John O'Donohue has written of this artist "Kenneth Webb's work is a homage to the secret life of colour. Though his paintings are intense icons, you never have the feeling that form or content are forced or contrived. He has managed to penetrate to some deeper level from which the painting is able to assert the dream of its own shaping. He says paintings have always come to him. His work does have that tone of lyrical necessity: they had to come. In our post-modern era, where so much of life is reduced and commercialised through visual and aggressive image, it is healing for the eye and refreshing for the heart to encounter these paintings. If beauty is in the eyes of the beholder, then Kenneth Webb is a graced and gracious beholder".
Sara Sue McNeill (DA FILS)
Sue has been a tutor with North Down and Ards instuite and other organisations for the past 15 years. Sara is in much demand for her demonstrations to Art societies in Ulster and the republic of Ireland. She has exhibited widely throughout Ireland and the uk, including the Mall Gallery, London, Ulster Academy and with The Ulster Society of Women Artists for 15 years and resigned as Vice President in 2003, to concentrate on a series of commission and exhibition work covering 2007-2008.
Her work can be found in public and private collection through Ireland, UK, USA, Canada and India. Her commissions include Bank of Ireland and Peter John House and Kenny Gallery, Galway and many more…
The Irish School of Landscape Painting
Alcock and Brown Hotel Clifden Co Galway.
Painting break in Connemara with full use of Artist Studio.
4 day tuition, 5 nights accommodation, bed and breakfast at Alcock & Brown, Clifden.
Tel: +353 (0) 95 21880 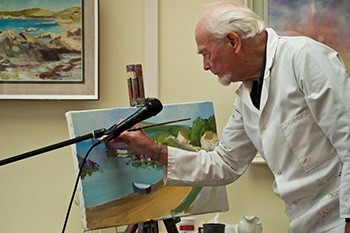